Morning All!
How are we all? I'm feeling good,here later down the page I'll explain why a few weeks back I was in a right foul mood! BUT for now I'm here to share a new card made using 1 of the NEW & MEGA Gorgeous Embossalicious Embossing folders from Crafter's Companion. 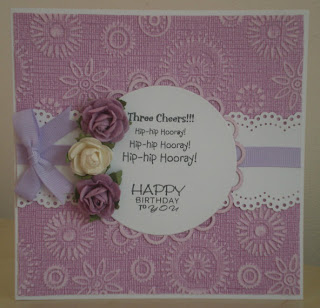 I have used some Vintage Cordinations cardstock, I embossed it with the Flower Power embossing folder.  I sanded it with my sand it gadget, I added a lacey border made with Martha Stewart punch, added some ribbon.  I cut a plain & lacey scalloped circle nestability & added a Birthday greeting & added purple & white flowers.  A very girlie Birthday Card I think!
So here is my story....it's quite long & it also proves Travel Agents also have problems with their own bookings its defo not just the customers!!
I booked to go on a cruise to the Norwegian Fjords in August next year the cruise had only been booked for a week then I got a ltter to say it was cancelled and transfered onto another ship, I rang up & was advised it would be more money - plus I couldnt get the dates from work. Since then I managed to get the dates & since rang back & was advised there was no extra to pay. I had sent a letter to cancel as I thought I'm not paying extra when its booked, but then I got told it was the same I though "Oohhh NO I defo wanna go!" so emailed through & rang back to advise NOT to cancel. Now I am a travel agent & I have booked lots of customers on the same cruise as it was MEGA cheap, & they've been getting invoices confirming the new dates & I haven't so I sent a Facebook message, & I've just received a phonecall from work. The cruise company are on teh phone they got the letter but not the email (even though we rang up to chek they had the email & they did) & have cancelled my cruise.!!!! Now it just so happens Julie answered the phone & she has been speaking to the cruise company on my behalf (you're not allowed to do this on your own bookings) so she knew all about it. Shes got my cruise re-instated so next August I am DEFINETLY going to the Fjords! ARGH I'm so excited!! So next year I am off to here: 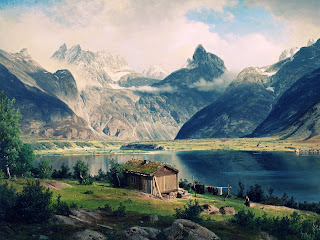 Well it might not be exactly here but somewhere very much like it! :D  Has anyone been to the Fjords before?
I have some DT work to do so I will be doing that today.  It might even be half decent now I'm happy my holiday is sorted!!! See you soon. x x x x
﻿
Posted by Caroline at 11:26

Gorgeous card hun, and I am so pleased you got your holiday sorted out at last. The fjords is something I'd love to see (any spaces left?) but in August I'd probably recommend you take some midge spray! Hugs Sxx

A lovely card and that embossing folder is beautiful.

ahh this is so beautiful.Love it xx

oh thats so so pretty

Caroline
Dereham, Norfolk, United Kingdom
Hi Bloggers thanks for visiting me. I am mostly a card maker but I do try my hand at other papercrafts now and again. If you're looking to purchase any card please visit my cards for sale page for more info!

If you fancy a chat

you can email me here:

Woooo I can color in!